Enjoy the tour and hopefully you can visit some of these soon!

It is most famous for its 100 mile-lone waterpocket fold, a geologic monocline (a wrinkle on the earth). There is a beautiful scenic drive (approximately 90 minutes round trip) that takes visitors through the park past cliffs, colorful layered rocks (including the famous Chimney Rock), and ancient petroglyphs. I enjoyed this particular park for the beautiful landscape and for the incredible drive through some of America’s most stunning geological formations!

Karijini sits about 275km south of Port Headland and 100km east of Tom Price, in Western Australia’s North-West Pilbara region.  Visitors who make the long drive there are rewarded with photography, hiking, climbing and swimming opportunities in a collection of gorges that have been spectacularly eroded into the landscape over two billion years.

Karijini possesses all the characteristics of the iconic Australian outback.  Unsealed and dusty roads, gums trees reaching to the skies, spinifex carpeting the red soil, kangaroos hopping across the landscape, night skies filled with stars or lightning displays, sweltering heat, a crowded population of flies, wide open spaces and deafening silence.  But the real attraction of Karijini is the dramatic and intense landscape of its gorges.

Yosemite National Park, in central California, was the first National Park I visited and has remained one of my favorites. This view of the valley, after emerging from the Wawona tunnel, still takes my breath away every

time we visit. Yosemite is beautiful in any season with varied waterfalls,meadows, granite cliffs and Sequoia groves and appropriately declared a United Nations World Heritage site.

Located on an island in the middle of the Pacific Ocean, one can find the most unique archeological and natural park of South America: The Rapa Nui National Park. With more than 16,000 hectares, this park comprises a majority of the island and is filled with hundreds of Moais statues. Definitely one of the most magical places on the Earth.

For as long as I could remember, the Serengeti National Park had been on my travel bucket list. One of the largest and oldest ecosystems on earth, the Serengeti is known for its stunning scenery and diverse wildlife, most notably, the “Big Five.” On my safari, we saw all five which apparently is rare, so don’t be disappointed if you don’t tick them all off on your first trip. It gives you even more of a reason to go back!
Wild elephants are some of the most beautiful animals on the planet. After seeing them several times in the zoos, I had no idea how much I would love seeing them in their natural environment. They are so slow and peaceful. We even had an entire family of elephants walk right in front of our jeep! It was an experience I will never forget, and I’m glad I was able to capture a small piece of it on camera.

One of my fondest memories from my travels in South America, is the time I went hiking in Los Glaciares NP near El Chaltén in Argentina. From town, there are numerous trails that bring you to some of the most amazing landscapes you will ever see. One of my favourites was the view from Laguna de Los Tres. I hiked the uphill trail in the dark before sunrise, just so that I could be at the top in time to see the first rays of the sun hitting the magnificent Fitz Roy and the surrounding peaks, one of the most famous natural skylines in the world! 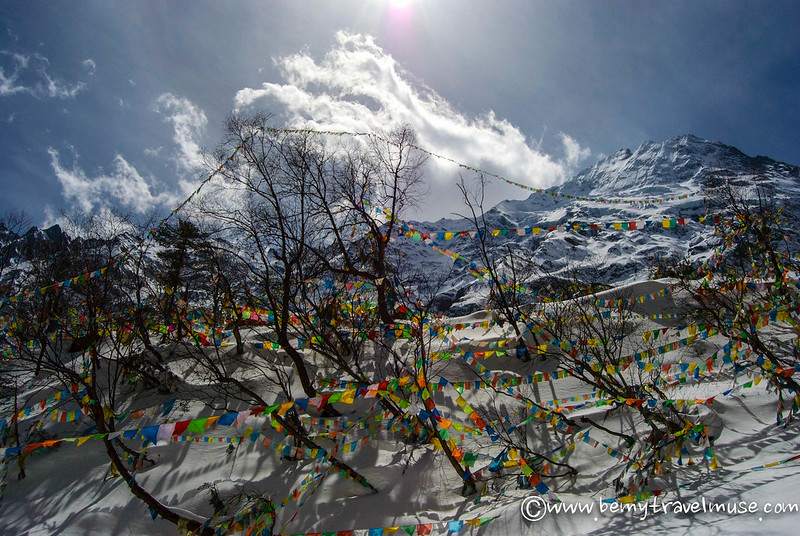 Yubeng sits in Yunnan province in China on the border with Tibet. Though foreigners are not always allowed in Tibet, and certainly not without a tour, Yubeng is a national park that always welcomes visitors from all around the world.  Only reachable on foot or mule through 17 kilometers of mountains, Yubeng is a small town populated with Naxi minority villagers – incredibly warm and friendly individuals who make this sacred Buddhist land their home.  Though chickens, donkeys, pigs, and yaks have complete freedom to roam the narrow dirt roads in and around the town, the feeling of peace all around the area is incredible.  Prayer flags are strung along every hiking trail which snakes through pine forests, running rivers, and through gorgeous mountain peaks. Accessible via Deqin, Yubeng is a place I will not soon forget.

Zion National Park is gorgeous in the summer or the winter.  Listed as a National Park in 1919, it is known for its spectacular Navajo sandstone canyons and Zion Canyon. The Navajo sandstone cliffs are some of the highest in the world. Hiking, bicycling, backpacking, and scenic drives are some of the park’s recreational activities.  Many of Zion’s towering cliffs and formations are viewable from road pull-offs and are quite breathtaking.  Mule deer and mountain sheep are easily spotted up the cliff sides grazing.  Zion National Park is an experience in grand and glorious landscapes.

When I was living in Bratislava, a friend there recommended the Plitvice Lakes National Park in Croatia because she’d been there once on a school trip. She didn’t prepare me at all for the beauty I was headed for. It’s a huge lake and waterfall system featuring every shade of turquoise; I spent two days walking the paths there and still want more. Understandably, it was one of the first national parks created in that region and was listed as a UNESCO World Heritage site remarkably early, back in 1979. I can’t wait to get back there one day.
Amanda Kendle – to Not A Ballerina http://www.notaballerina.com/

Cristalino Private Reserve received a RPPN status in 1997. The park can’t be used for anything else than to preserve nature – ‘until eternity’, as the Brazilian law states. It covers 12,000 hectares and is extremely rich in biodiversity; several species of birds were discovered here. Cristalino State Park and two rivers surround the reserve, minimizing the chance of unwanted intrusion and destruction. Watching the sun rise from the 60-meter-high observation tower simply mind-blowing. To me this image gives hope that nature will win from mankind’s destruction.The tower belongs to the Cristalino Jungle Lodge.
More info about the reserve
http://www.wildlifeworldwide.com/locations/cristalino-private-reserve-alta-floresta
Karin-Marijke at landcruisingadventure.com

I saw some photos of Ha Long Bay about two years ago and made a special trip to Vietnam just to see it and it was so worth it!  I went on a three-day 2 night cruise of this lush mountainous area.  I saw many floating fishing villages and explored some beautiful caves.

In 2012, New 7 Wonders Foundation officially named Ha Long Bay as one of New Seven Natural Wonders of the world. Hạ Long Bay is also a member of the Club of the Most Beautiful Bays of the World.  This was definitely one of my tope five travel experiences so far!

“Mount Augustus National Park probably is most remote park in Australia and I love that remoteness. Not so many tourists know about it though it’s main feature is the biggest rock in the world. It takes 1.5-2 hours to reach top of this rock and you can enjoy view of endless plains from the summit just by yourself.” http://www.shorttraveltips.com/climbing-mount-augustus/

The Royal National Park is situated in the southern outskirts of Sydney, taking up over 15,000 hectares of land. Established in 1879, it is the world’s second oldest National Park after Yellowstone in the US. You will find a variety of habitats within the park including rainforest, heath, woodlands and estuarine systems along with some of Australia’s most iconic wildlife. Popular activities include walking the 26km coastal track for spectacular views, Garie, Wattamolla and Burning Palms beaches which are some of Australia’s most beautiful, shorter walks through the park to see waterfalls and Aboriginal carvings, hire a boat or have a picnic at Audley and camping out under the stars surrounded by nothing but nature.
Jennifer Seligmann at http://thetrustedtraveller.com

If you’re traveling around New England make sure to check out Acadia National Park. Located just off shore of Maine on a few islands, Acadia presents a world full of outdoor activities year round. From hiking to swimming, camping to biking, you can do it all while enjoying nature at its best. One of the best parts of the park are the cliffs that drop straight down into the Atlantic.
Rachel Campbell at http://treepottravels.com

Pu’ukohola Heiau National Historic Site on the Kohala coast of Hawaii island is a huge heiau (temple) that was built by Kamehameha I, the first king of the Hawaiian islands. The heiau is significant because a vision from a Kahuna (priest) predicted that if Kamehameha built this huge temple to honor the Hawaiian god Ku, then he would be the first king to unite all the Hawaiian islands. The heiau was created by all of his people forming a chain over 17 miles long and handing from one to another huge rounded rocks to build this magnificent heiau that we see today. eventually Kamehameha did conquer all the islands and became the first king in a rule of families to rule all of Hawaii. Regular annual celebrations occur at the site and park to commemorate the first king and all the main practises and traditions of Hawaiians of an earlier timeframe.
Noel Morata at https://travelphotodiscovery.com/
If you enjoyed readng this Earth Day post, please do share it with any of the Social media buttons below. Also for more images, new content and information please check out my Google + page on the right sidebar.